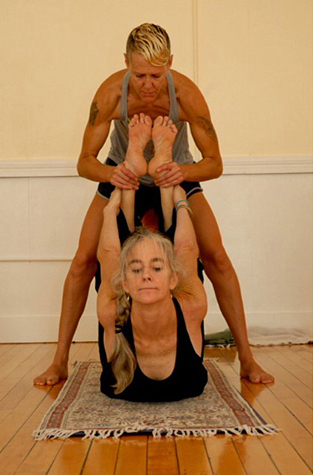 sherry russell began practicing ashtanga yoga with eddie stern in 2001. she is dedicated to upholding the tradition of teaching, as it was taught to her. sherry began teaching for the shala in 2010, she teaches daily mysore at their fort greene location and teaches several led ashtanga classes at the shala in union square. she is honored to have the privilege of assisting teachers nancy gilgoff and christine hoar on their annual adjustment clinics and workshops in vt and montauk since 2008. in 2013-2014 sherry worked with ashtanga yoga outreach providing ashtanga yoga to adults with autism and developmental disabilities at a dayhab in staten island. sherry has been teaching yoga and meditation to children in nyc public schools since 2005. from 2005 to 2016 her work in the school system was in collaboration with bent on learning, providing yoga to underserved communities. she is now developing and facilitating her own programs for children with special needs, at ages ranging from 2 to 12.  sherry became a certified cranial sacral therapist in 2017.  she works one on one through this modality with clients ranging in age from 4 to 90.

private and small group classes available for all ages/levels.
917-279-4178
skullsandbonescranio@gmail.com