Padmasana. The word itself is beautiful, especially when you pronounce it as they do in India: with a softness around the ‘d’ so that it sounds like ‘padth’ rather than ‘pad’. Padma is the Sanskrit word for lotus, a flower that grows in the marshes and swamps of India. The Buddha spoke of the lotus as an allegory for enlightenment: “As a lotus flower is born in water, grows in water and rises out of water to stand above it unsoiled, so I, born in the world, raised in the world having overcome the world, live unsoiled by the world.”

The Buddha’s words are poignant not only because of the beauty of the flower itself, but also in the waters from which it rises. The lotus grows out of mud, marsh, and swamp, yet blooms in pristinely creamy pinks and whites. This natural miracle gives rise to teachings such as “no mud, no lotus,” carrying the wisdom that each of us may rise out of adversity with grace, purity, and resiliency.

The lotus is also a sacred symbol for the divine. The Indian god Vishnu was born out of a lotus. The Indian goddess Lakshmi is often shown standing on a lotus, holding a lotus. Padma is another name for the goddess.

These layers of symbolism already existed when the yogis of ancient India were creating, naming, and sitting in padmasana. The Sanskrit word translates literally to lotus pose (padma= lotus; asana= posture).

Asana, the postures of yoga, form the third limb of Patanjali’s eightfold path (Ashtanga yoga). Very few asana are described in the oldest texts of India, and you will see them carved into temples as the postures taken by the gods and dancers of ancient India. Padmasana is the classical posture, always conveying seated serenity.

By young, I mean I was just learning to walk. I never really crawled as a child, just scampered around in Downward facing dog, not wanting to dirty my knees. I remember clearly the way my father took lotus pose, seated on the living room floor, calling my attention: Megna, can you do this? And it looked so simple, that I was truly surprised that I could not easily pull my ankles up onto the creases of my hips.

Today, padmasana is a very comfortable way for me to sit. It is the classical posture for meditation, and comes up in various forms throughout the Ashtanga vinyasa sequences. Early on in the primary series, Ardhapadmasana (half-lotus pose) is introduced as a standing balance. Working through the seated postures, the yogi learns many ways to sit and fold and twist with the legs in ardhapadmasana (ardha= half). In Second Series Ashtanga, the yogi is asked to balance, inverted, on the forearms and take lotus while upside down.

Padmasana is central to the closing sequences of Ashtanga vinyasa yoga, which are the poses with which every Ashtangi finishes her practice. In salamba sarvangasana (shoulder stand), the yogi takes lotus while looking up at the legs. This posture becomes a bit of a backbend right afterwards, as the yogi holds her toes and arches the spine back, all while in padmasana. And the final three postures of the Ashtanga yoga practice are all variations of padmasana: folding forward, then seated upright for meditation, then lifting upwards in a final position of strength and levity before laying down to rest.

Each and every time we come into padmasana, lotus pose, we channel not only the purity and serenity of the flower rising pristinely above the mud, but also the generations of yogis who sat in this posture to practice peace and meditation.

Megna Paula teaches yoga at the Shala on Tuesdays, Fridays, and Sundays. Come for a class! And find her on Instagram (https://www.instagram.com/megnapaula/) for more insight into the postures and teachings of yoga. 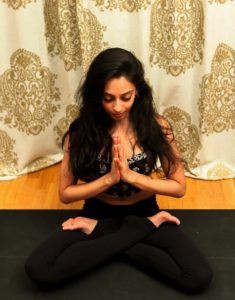