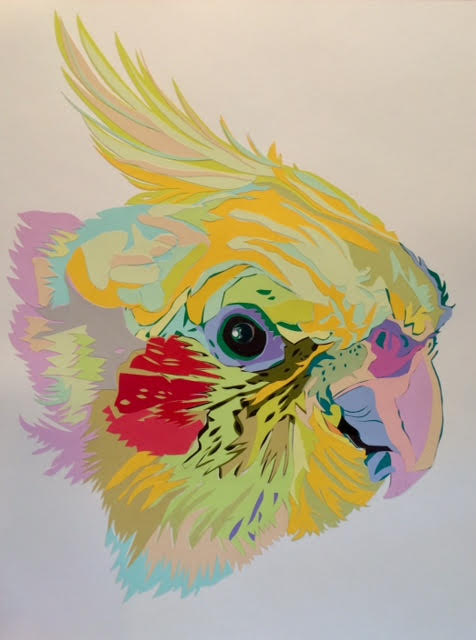 if you’ve visited our union square location in the last month, you’ve had the pleasure of viewing artist and shala student adam dougherty’s intricate, exuberant, and reverent animal portraits. shortly after the show went up, fellow shala students jonathan and alene herman reached out to adam to commission a piece honoring their beloved cockatiel, rocky. jonathan shares rocky’s story here.

When I was 16 years old, my friend Craig, who lived down the street from me, had a cockatiel named Rocky. Craig’s mom thought Rocky was the reincarnation of her father (Rocky was very talkative!), so she wanted Craig to give Rocky to an animal lover, which is a perfect description of me. I adopted Rocky in the summer of 1993, when she was three years old. From that moment on and over the next nearly 25 years, we formed an extraordinary relationship. Rocky quickly became my best friend and most loyal companion, and was very welcoming of Alene when we met in late 2004. Both of us nurtured and cared deeply for Rocky, until she died on April 30, 2016, at the age of 26. Shortly before she died, we found out that she was one of the longest-living cockatiels ever recorded (four years of a bird’s life is equal to about one year of a human’s life). We take a lot of pride in this accomplishment and, reflecting back, we came to the conclusion these simple factors, amongst others, aided in Rocky’s longevity: freedom of expression, patience, perseverance, and, above all, deep and endless love—all amazing hallmarks that could be found at the Shala, too. Adam’s artwork captures the essence of Rocky and will allow her spirit to live on in countless ways.

three cheers for shala students making these beautiful connections with one another! thank you to jonathan, alene, and adam for sharing the story of this collaboration with us.

more on the artist: Adam Dougherty lives and works in Brooklyn, New York, and is originally from Baltimore, Maryland. He is a graduate of Pratt Institute and the Rheinhart School of the Maryland Institute College of Art. Using paper, his compositions explore concepts of color and design, rendering new visions of everyday landscapes, people, and in this case, house pets. Suddenly, our everyday companions and environments become imbued with spirit, energy, and emotion. instagram: @adamdough